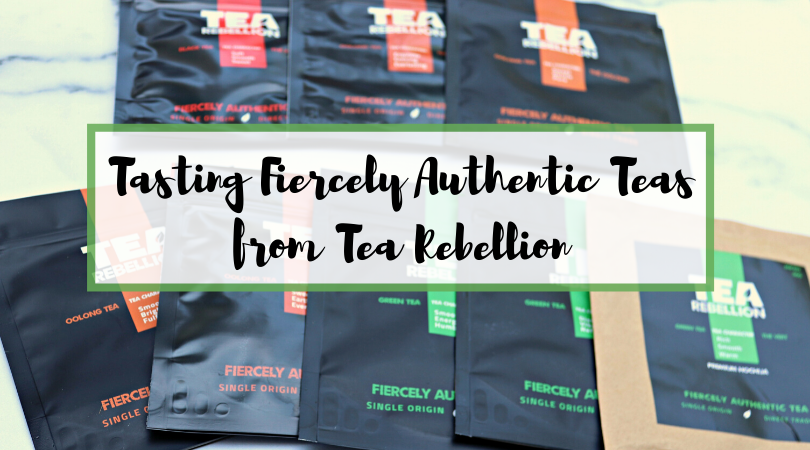 I first discovered Tea Rebellion in my Instagram feed. What caught my attention was their dedication to transparency. I was excited to see familiar names like Harendong and Jhentea among their curated line of directly sourced specialty teas. They place the spotlight on their partner farms, giving the tea makers full credit for their craft. This is something I always try to encourage and promote in the tea industry whenever I can.

Green, Long Form is a green tea produced Harendong Organic Tea Estate in Indonesia. The dry leaves were long and twisted without a uniform shape. It brewed up a brassy gold color after being infused for 1 minute. The taste was mellow and sweet with toasted notes and just a hint of orchid. It almost reminded me of a Bao Zhong oolong. Once the leaves had unfurled I was able to see some oxidation on the leaves. Tea Rebellion describes this tea’s character as humble and I would have to agree with that sentiment. This isn’t an “in your face” green tea.

Kukicha is a green tea produced by NaturaliTea in Japan. If I didn’t know any better, I would almost think that this was lemongrass rather than tea. That is because kukicha is made from stems rather than leaves. It brewed up a pale greenish-yellow after the recommended infusion time of 30 seconds. The taste was light and refreshing with a savory finish. There was a distinct citrus note that really made this tea stand out for me. I could see this being a great way to start the day. It isn’t harsh but definitely has some energy to wake you up.

Premium Hojicha is another tea from NaturaliTea in Japan. This is also a stem-based tea but on the opposite end of the spectrum. It brewed up a deep shade of amber after being infused for 90 seconds. The taste was woody and sweet with just a hint of smoke. There was no bitterness or astringency at all. Maple syrup immediately came to mind. The smooth earthiness was just so comforting. Out of all of the teas I tried, this bag was finished first because I kept reaching for it before bed.

Light Oolong, Rolled was produced by Harendong Organic Tea Estate in Indonesia. The leaf style was tightly rolled, similar to what you would expect from a Taiwanese oolong. It brewed up a pale greenish shade of gold. The taste was light and sweet with subtle floral notes. It started out vegetal but ended in a buttery, almost milky finish. This tea did very well brewed in a gaiwan but I also enjoyed it in the more western fashion.

Medium Roast Oolong, also made by Harendong Organic Tea Estate, certainly lived up to its name. The leaf was similar in appearance to the lighter oolong but noticeably darker. It brewed up more of a golden amber color after a 2-minute infusion. The taste was floral with a defined roast and caramelized sugar-like sweetness. I enjoyed this rendition a bit more because it was more balanced. This tea re-steeped well and even withstood some longer infusions when I experimented a bit.

Alishan Oolong was made by Jhentea in Taiwan. The dry leaf was tightly rolled with varied shades of green. My sample had quite a bit of broken leaves but it seemed like that was because it was the end of a package rather than reflective of the tea itself. It brewed up a pale gold color. I noticed an intense floral aroma before even taking my first sip. It was perfumy with notes of orchid and a thick, almost oily mouthfeel. This tea did well when brewed in a gaiwan or in a more western style.

I was really eager to try the Alishan Black because I am a big fan of Taiwanese black teas in general. This one was also made by Jhentea so it was cool to compare it to the oolong version. The dry leaf was similar in appearance but very dark. It brewed up a deep shade of amber. My gaiwan lid smelled exactly like maple syrup. The taste was subtly fruity and super soft with sweet notes of caramel. A mild maltiness and notes of dark chocolate kept things balanced and grounded. Talk about dessert in a cup! There was no astringency at all and the aromas lingered forever in my palate.

Forever Spring is the tea I was looking forward to the most so I saved it for last. I first discovered this tea over five years ago and still remember it fondly. The dry leaf was dark green and tightly rolled. It brewed up a bright greenish gold. This is one tea that you’ll definitely want to make in a gaiwan if you can. The taste was verdant and fresh with deep floral notes and a tropical fruit finish. Complex aromas lingered in my palate and I even found myself sniffing my empty sharing pitcher to take it all in.

Have you tried any of these teas from Tea Rebellion? Tell me about it in the comments below!

Teas provided for review by Tea Rebellion. Opinions are my own.