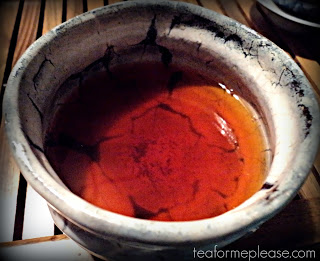 For those of you who aren’t familiar with Tandem Tea Tastings, some tea friends and I get together every month to do a group tasting of a particular tea over a Google+ Hangout. It’s a wonderful way to connect even though Geoffrey Norman is on the west coast, Rachana Rachel Carter is in the midwest and I’m here in New Jersey.

December’s tea was certainly unique and it is one that I had been looking forward to for a while. Although it appears to be a puerh, it is actually a compressed black tea. Sir Geoff picked these up for the group from one of his local haunts, Jasmine Pearl Tea Merchants. I received my brick several weeks beforehand and it taunted me from my tea bin. I may or may not have opened the wrapper just to take a sniff.

I used my largest gaiwan to steep this since it had been getting a bit dusty. Boiling water and 30 to 45 second steeps worked well for me but we all discovered that experimentation was key. It started out light but the flavor grew and more and more chocolatey with each infusion. It took until my fourth round for the brick to totally fall apart. Darlene Meyers-Perry was obsessed with the aroma and we caught her with her nose in the gaiwan on multiple occasions. Jo J preferred longer steeps to get a deeper, richer taste.

As always the topics of conversation bounced from the tea at hand to a myriad of other things. Current tea events, my boyfriend’s dislike for Japanese green teas and traveling to tea expos were all discussed. Darling but sleepy Ethan Asom Carter even stopped for a visit. I’ll be sending the group some interesting teas from a small farm in Nilgiri, India for next month. Geoff may have been a little excited about the silver needle 🙂