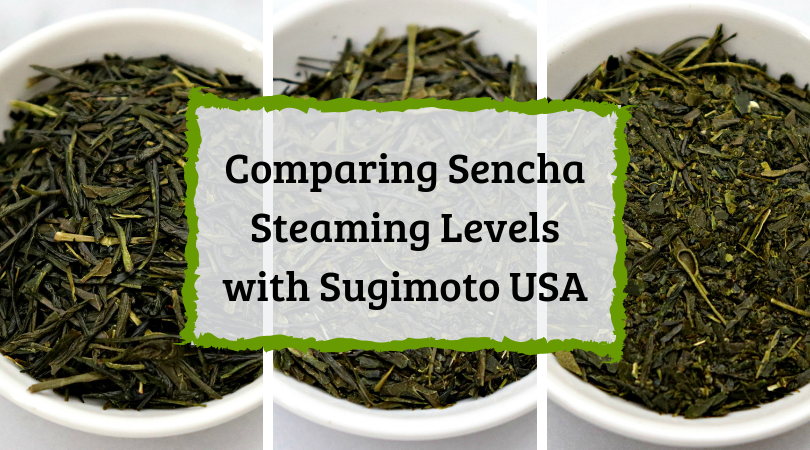 The folks at Sugimoto USA included samples of three different senchas when I purchased their temomi shincha (along with a very sweet note). Of course, I couldn’t resist doing a comparison tasting of sencha steaming levels. This exercise definitely helped to educate my palate. I hope that you all learn something from it as well. Drinking multiple infusions of this many green teas in one sitting is not for the faint of heart, even for a seasoned tea drinker like me.

Keep in mind that there is a lot of variation between producers. One person’s asamushi is another’s futsumushi. That is part of the fun of tasting teas like these! Sencha represents around 80% of the tea produced in Japan. While it might be easy to see it as a singular entity, there are still layers of differences to explore.

The appearance of Organic Sencha Asamushi was fairly typical for a sencha. The leaves were mostly dark green in color with a subtle sheen. It brewed up a pale yellowish-green color. The taste was grassy and bold yet sweet at the same time. It wasn’t overly astringent and the finish was clean and refreshing.

Sencha Chumushi had a similar but slightly more broken appearance in comparison to the asamushi. It brewed up a similar shade of yellowish-green but much cloudier, particularly for the second infusion. The taste was definitely more vegetal and astringent but there was still a good amount of natural sweetness.

Last but not least, the leaves of Sencha Fukamushi were even more broken than the previous two selections. Broken disn’t necessarily a bad thing, they are just broken down by the more intense steaming. The liquor was also darker and cloudier appearance. Tastewise it was savory with a more noticeable umami element.

Have you tried all of these sencha steaming levels? Which one is your favorite? Let me know about it in the comments below!