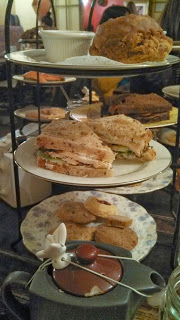 The NYC crowd on Steepster has been trying to hold monthly meetups at different tea spots around the city and last week we went to Alice’s Teacup (Chapter I). You might remember that I stopped in there for the first time last month but wasn’t able to get a table at the time. We had a large group without a reservation and they were very accommodating.

I must say that the dining room is absolutely adorable. I loved the eclectic mix of refined tearoom and wonderland whimsy. All of us ooh’d and aah’d at the wonderfully mismatched teacups. Just about everyone in the group selected “The Nibble” which gave a good sampling of their offerings. I had a very tasty Lapsang Souchong chicken sandwich, pumpkin scone and an assortment of cookies. For my tea I selected the Royal Yunnan. It wasn’t quite as a Yunnan-ish as I was hoping for but it was prepared well.

Our waiter took the time to calculate what each person’s portion of the bill would be. That made things so much easier to figure out! The only two things that I would have changed were the water and the way that the jam and cream are served. I don’t mind tap water in the least, but ours was positively tepid. It doesn’t take much effort to put water in the refrigerator before serving and I would have appreciated a nice, cold glass. The jam and cream were plopped together in one tiny bowl. While I suppose that doesn’t matter much as far as taste, I still prefer them to be separate.