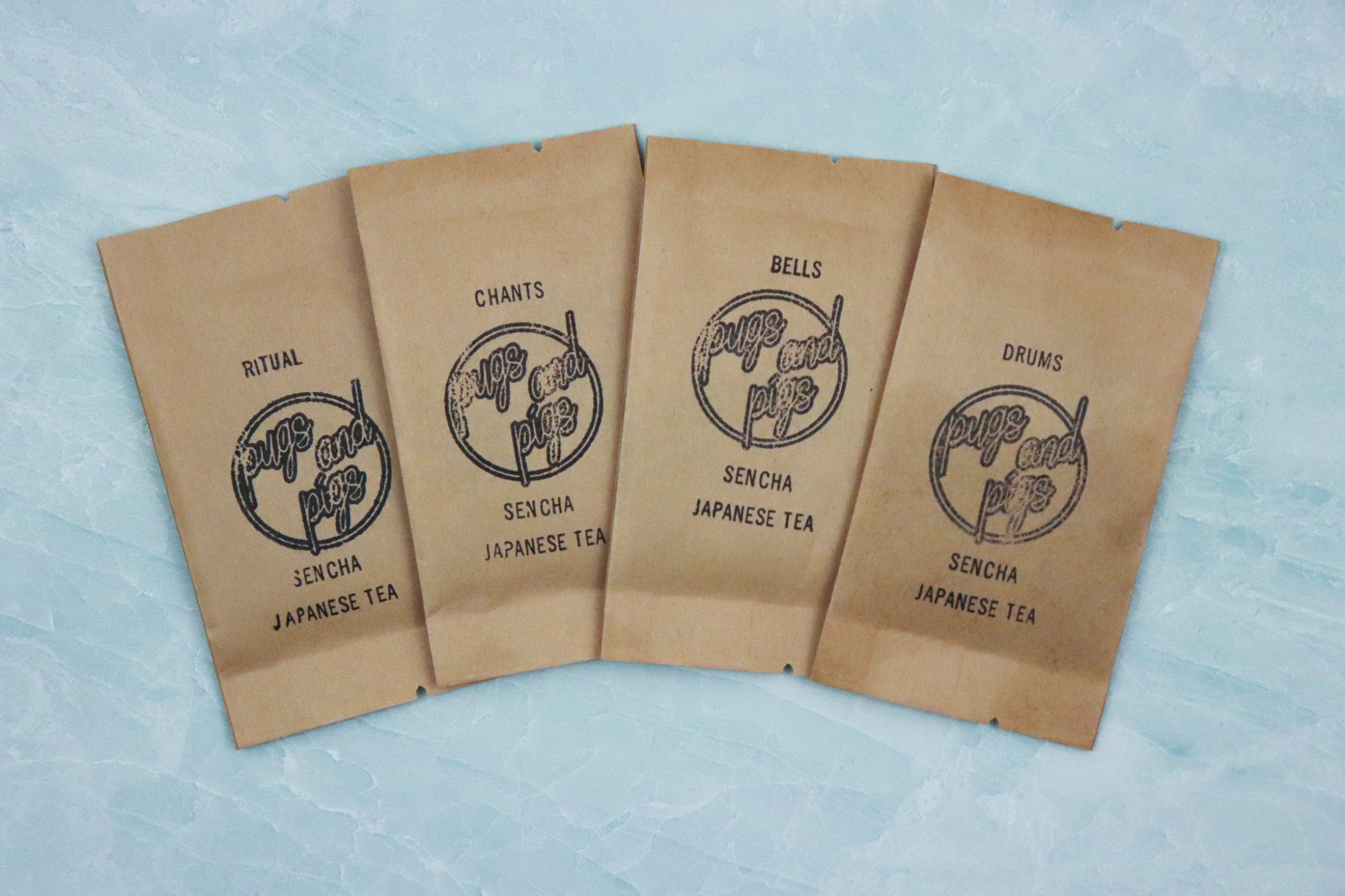 Sencha is sometimes considered a bit generic by folks when they first get into tea. The truth is that there is quite a bit of diversity if you take the time to look for it. Pugs and Pigs reached out to Instagram, and I was intrigued. They are primarily a ceramic gallery, but they also offer a small curated selection of Japanese green teas and puerh. Each of these teas is a sencha from Japan but they are from different regions and cultivars.

I prepared each of these teas in a Tokoname kyusu using Pugs and Pigs recommended parameters. The water temperature was 167℉ and the first infusion was 45 seconds. Two subsequent infusions were 15 seconds. Let’s dig in!

Drums is an unshaded fukamushi sencha with a strong hiire (roasting step). It was mechanically harvested. The leaves had a somewhat appearance. It brewed up a pale greenish-yellow liquor that was surprisingly clear for a deeply steamed tea. The taste was slightly nutty with sweet and mellow notes of buttered veggies. It was savory with mild umami. There was some astringency, but it was not bitter or unpleasant.

Bells is an unshaded fukamushi sencha with a light hiire. It was mechanically harvested. The leaves were fairly broken with a brighter green appearance. It brewed up a greenish-yellow liquor that was somewhat cloudy. The taste is best described as intensely aromatic. It was oceanic and fresh with plenty of umami. There was a distinct note of watermelon rind that made me want to keep drinking. The 2nd and 3rd infusions were even more cloudy than the first. There was some astringency, but it was balanced.

Ritual is an unshaded futsumushi sencha with a very light hiire. It was harvested by hand. The leaves were mostly whole and darker green in color. It was hard to capture in a picture, but they had a brilliant sheen to them. It brewed up a pale gold liquor that was mostly clear. The taste was sweet and mellow with notes of toasted sesame. There was also a floral note that reminded me of sweet meadow hay. The last infusion was slightly more vegetal than the first two, but it wasn’t grassy at all.

Chants is an unshaded futsumushi sencha with a light hiire. It was harvested by hand. The leaves were the most whole out of these four teas. They also had a nice sheen. It brewed up a yellowish gold liquor. The taste was surprisingly fruity. It very much reminded me of clementines. Talks about spring in a cup! I don’t think I have ever experienced a sencha quite like it. The finish was grassy and sweet with a crisp astringency.

These are all steamed green teas produced in Japan, but each of them offered a very different experience in the cup. I was truly amazed at how distinctive they all were. Although they specialize in ceramics, it certainly seems like this company has a keen eye for tea sourcing. This entire sencha collection is currently on sale (presumably to make room for incoming harvests), so it is a great time to stock up if you are interested.

Have you tried any of the teas from Pugs and Pigs? Let me know your thoughts in the comments below!

All teas provided for review by Pugs and Pigs.