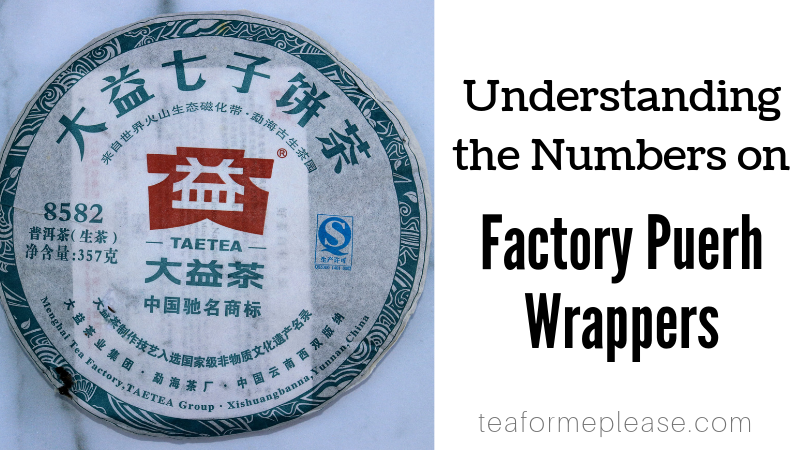 One of the things that I found the most confusing about puerh when I first got started was the numbers on factory puerh wrappers. There wasn’t a lot of information available way back when. I knew that some numbers were famous (like 7542) but I had no idea what any of that meant. I am by no means an expert but I thought it would be useful to cover the basics here on the blog.

This coding system was first implemented in the 1970s so that factories would be able to trace and manage their many productions. Buyers beware: recipes do not equal consistency. You may experience a wide range of quality, even between teas with the same recipe numbers. I recommend seeking the advice of someone well versed in purchasing factory teas before taking a big leap.

Year the Recipe was First Produced

The first two numbers represent the year that a particular recipe was first produced. I see a lot of confusion because many believe that this is the year that the actual tea was made. Believe me when I tell you that the cake I used for the header image is NOT from 1985! It’s actually a 2012 production I purchased from Yunnan Sourcing.

The third number represents the average grade of the leaves used. Factory cakes are usually blends of several different leaf sizes. Smaller leaves (1st-grade) are usually considered more desirable than the largest leaves (10th-grade). It is important to keep in mind that much like the grading system used in Darjeeling, size is not necessarily an indicator of quality. In the case of shou puerh, 1st-grade leaves will have a more golden look since there is a higher number of buds.

Edit: Glenn from Crimson Lotus Tea messaged me with some important info to note here: Xiaguan uses the third digit differently. It’s used as a sort of product identifier and not leaf grade. For example, 8653 is sheng and 8663 is shou.

Until fairly recently, puerh was made in government-run factories supervised by the China National Native Produce & Animal By-products Import & Export company (CNNP). The last number in the recipe represents which factory produced the tea. The first three are the best well known so you will see them more often than the others.

You might also see a three digit batch number appended to the recipe or listed in the description of a tea. The first digit is the year that the tea was pressed and the last two represent the production number. For example, the cake that I photographed for this post was batch 202, meaning that it was the second production of 2012.

Hope that this post helps you to understand the numbers on factory puerh wrappers a little more. Is there something else you’d like to know about puerh? I’d love to hear about it in the comments below!

Introduction to the Three Eras of Puerh Tea