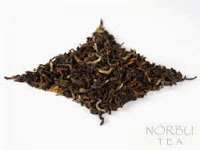 Regular readers of this blog know that I am a sucker for Darjeeling, especially autumn flush. I bought a batch of sample sizes from Norbu Tea a few months ago and this was actually one of the last ones left. The dry leaves were beautiful to look at and I always love seeing lots of golden tips in my tea. It steeped up a really nice dark amber color that seemed to have a glow all its own. The taste was on the malty side with heavy floral musk notes and a fruity quality that almost reminded me of peaches. It had a pleasant astringency but I don’t think that it was quite strong enough to take milk and sugar. My second infusion was just as tasty as the first. I didn’t have a chance to try it yet, but I feel that this would make an excellent iced tea. Norbu Tea’s product pages always include a ton of background information about the teas. For instance, this one told a story about Thurbo Estate that I had never heard before:

“The name “Thurbo” is most likely an adaptation of the Nepali term “Tombu,” which means tent. Reportedly, during the Anglo-Nepalese war of 1814-16 (the Kingdom of Nepal lost control of the Darjeeling region and Sikkim to the British as a result of this war), British troops set up a tent camp in the area that is now the Thurbo Estate, and eventually the term Tombu morphed into Thurbo.”