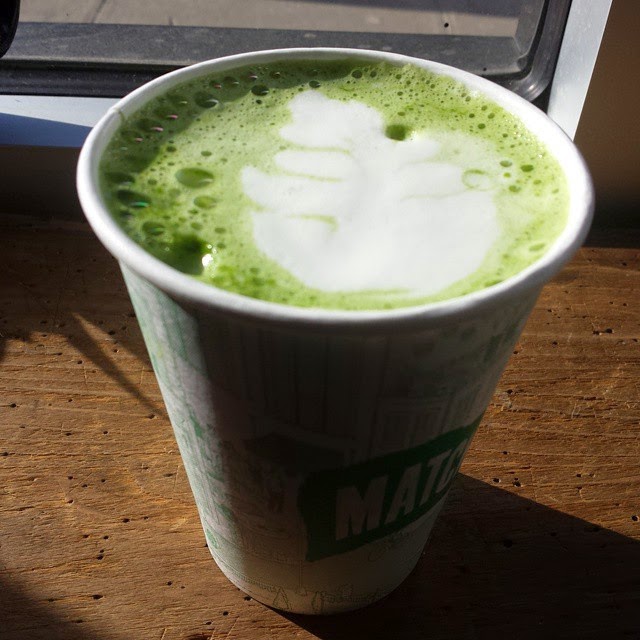 I was really excited to be able to attend the annual coffee and tea festival since I missed out completely last year. I wasn’t sure what to expect because it was moved to a new venue, the Brooklyn Expo Center. The tickets hadn’t sold out as they had in past years so I was hoping that it would be less crowded. Unfortunately it seemed like it was more crowded than ever. It was difficult to move through the show floor or even to speak to vendors. I found it exhausting and overwhelming. I love tea events like this because I get to catch up with fellow blogger friends as well as with vendors that I don’t get to see often. That being said, there are definitely some issues. The crowd at this particular show seems ruder every year. Now that part is out of the way, here’s a bit about my experience.


I got to the Brooklyn a bit later than I had planned, mostly because I rarely get to spend a weekend morning with my boyfriend. I did get there just in time to meet up with Jo J and Sara at the Joseph Wesley Black Tea booth. Joe and his lovely wife were crazy busy but still took the time to say hi and pass down a sample of tea. The press of the crowd was a bit much so we made our way over to see Sammy at Everlasting Teas. I promised myself that I wouldn’t purchase any tea but his Mr. Su’s Experimental Black really caught my attention.

Before I knew it, it was time to head to the seminar that I had signed up for. Oxidation Effects of Green Tea was presented by Shiho Kanamaru, Founder of Cha Do Raku. I welcomed the chance to sit down and relax. Shiho was extremely knowledgeable and did a great job of explaining everything, even with a class of mixed knowledge levels. We tasted six different teas, four Japanese greens and two Taiwanese black teas. The two teas that were oxidized were the ones that I enjoyed the most. They were smoother and sweeter with less astringency than a typical sencha. I think they were something like a Chinese yellow tea in that respect.

After the seminar, I visited the Cha Do Raku booth to pick up a Yume oxidized sencha as well as some gyokuro. After walking the floor for a bit I circled back to pick up their Honey Black that was served during the seminar. I just couldn’t stop thinking about it!

I met up with Natasha N and walked the floor a bit, or at least as best we could. I was particularly excited to introduce her to Lucy from Silver Needle Tea Co.. Sunday almost felt more crowded than the day before. She wasn’t able to stay long but it’s always great to catch up. I had a little bit of time to kill before my class so I made it a point to hit up some booths that I hadn’t gotten to visit properly. Chief among them was Canadian vendor ZhenTea. I had to thank them for joining and contributing to the Tea for Me Please Google+ group. They were kind enough to give me a few samples, including a very intriguing Tie Guan Yin that I will be writing about soon.

Last but not least was my seminar Beautiful, Bold, Black Tea presented by Joe of Joseph Wesley Black Tea. Even better, I sat next to Sara so it was great to have someone to compare notes with. The seminar began with a brief slideshow, discussing how black tea is processed. We cupped seven different black teas. The first three were Assam, Darjeeling and Dian Hong. I hardly ever get to taste these teas together so it was interesting to compare them. Dian Hong was an interesting choice because it is made from the Assamica variety, making it more like these Indian teas than another Chinese variety might be.

The following four teas were Keemun, Bai Lin Congfu, Black Mao Feng and Longjing Hongcha. Joe’s Longjing Hongcha has been in my gaiwan constantly this winter so of course that was my favorite. After the tasting, he prepared some very special Jin Jun Mei gongu style. It was truly one of the best black teas that I’ve had in recent memory. I was surprised to find that a few of my classmates were friends from Instagram. Many of us lingered talking tea and drinking more rounds of that delicious Jin Jun Mei.

The seminars offered in past years rarely caught my attention. While there’s nothing wrong with pairing or cocktail classes, they just aren’t something that I am drawn to. I was so glad to see programming that was more attractive to the serious tea drinker. There were also much more tea vendors than coffee booths. Sorry bean lovers but I like it that way! I think that alone indicates the health and growth of the tea industry here in the U.S. That being said, I’m not entirely sure that I want to attend again next year. The show has simply grown too large. It just feels like the opposite of tea to me. That is a personal feeling and not necessarily a reflection on the show itself. There are lots of people who went and I’m sure they had a great time.