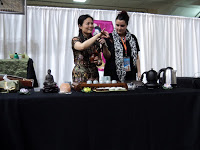 The New York Coffee and Tea Festival is an event that I look forward to every year and this one was no different. Usually I’m only able to attend one of the festival days but I was able to go to both and had a very tea filled weekend. The venue was different this year and the higher ceilings helped make things feel a bit less cramped. It was still extremely crowded, perhaps a little too much so. This an event that sells out every year but the crowds can make it hard to even get to some of the booths.

I was happy to see that there was a larger number of tea vendors represented. Compared to previous years, I felt that most of them focused on quality loose leaf tea. Events like this always have unrelated booths that don’t really seem to fit (like energy companys, ING and The New York Times). I’d much rather see those spaces filled by actually tea or coffee vendors.

This event served as a launch for several companies, including The Tea Lover’s Archives. I spent a while browsing the lovely teaware that Darlene had for sale but ultimately resisted as I really don’t have any more shelf space. Jo from A Gift of Tea was offering some of my favorite iHeartTeas products so I had to grab some Matcha Mint Julep Lip Balm.

One new company that I was very excited to see was Everlasting Teas. This father and son team offers farm direct Taiwanese teas. Rather than handing out tons of meaningless cups as many booths did, they opted to do tastings for just a few people at a time. I really enjoyed this approach because they were able to talk about each of the teas and explain where they were sourced. They had a package deal that included tea and a white gaiwan for $20 so I picked up a canister of High Mountain Jin Xuan.

Michelle Brody and her Reflections in Tea installation are a frequent fixture at local tea events. I did not get a chance to stop by this time but it seemed that her traveling tea house was a corner of respite for many people.

There were two vendors that will be opening stores in NYC shortly. Press Tea let me take a picture with their giant teaspoon. I thoroughly enjoyed the iced tea and earl grey marshmallows that I tried at their booth.

Chinese tea specialist tea-drunk will be opening a shop in the East Village. They were running tastings at their booth every hour. The one that I attended featured a delicate green tea, white peony and a raw puerh.

Bingley’s Teas was there with their line of teas that were inspired by the characters of Jane Austen novels. Their “loose woman” (referring to loose leaf tea of course) sign was a pretty big hit. I sampled the Miss Lucy Steele blend and enjoyed it very much.

Chai Diaries shared some seriously delicious chai granola. The two woman behind the company had a great story and were incredibly enthusiastic. I came home a pack of their peach flavored flowering tea.

Mixing alcohol and tea was also very popular. Capital Teas came up with the novel idea of cold steeping tea in beer. I’m more of a Guinness girl and I don’t really like Stella Artois but it was pretty tasty with some earl grey steeped in it.

I’ve been following The Tealogist on Tumblr for a while so I was excited to visit their booth. They will soon be launching Owl’s Brew, a line of teas crafted for cocktails. I had the coconut chai mixed with Captain Morgan and it was delicious.

One of the things I love about tea events is getting to speak with people like John and Mike Harney. They are truly some of the nicest people you’ve ever met and their passion for tea must be genetic.

Events are also a great chance to catch up with friends that don’t live nearby. Alexis from Teaspoons & Petals, Mario from Mario Travels and Effie from International Tea Review are among those that I was happy to see.

Haiyan Grzelak’s Chinese tea ceremony was beautiful as always. I’ve seen her perform at World Tea East and her enthusiasm is contagious.

Photographer Jon Gurinsky captured some great video of the festival.