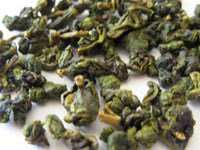 I have a weak spot for lavender in tea because it never fails to relax me but it doesn’t knock me out the way chamomile can sometimes. Being an oolong fanatic, this tea was the best of both worlds. The leaves had the appearance of a typical rolled oolong with the occasional lavender flower visible among the green. The aroma wasn’t as intense as I had heard it would be. However, that could also be the fault of my allergy suffering sniffer. I made this in my brand new Breville One –Touch Tea Maker using 195 degree water for three minutes.

The liquor was a very pale yellow and the lavender aroma was much more apparent. This tea was smooth and sweet with no noticeable astringency. Each sip started out tasting like oolong and ended with lavender. The second infusion had the best balance of flavors out of the three that I did. It had a really nice, cooling aftertaste that stayed with me for some time. I wished that I could have kept going but six cups of tea is the limit before I get that “I’m going to explode if I take one more sip” feeling. I would definitely recommend this tea.