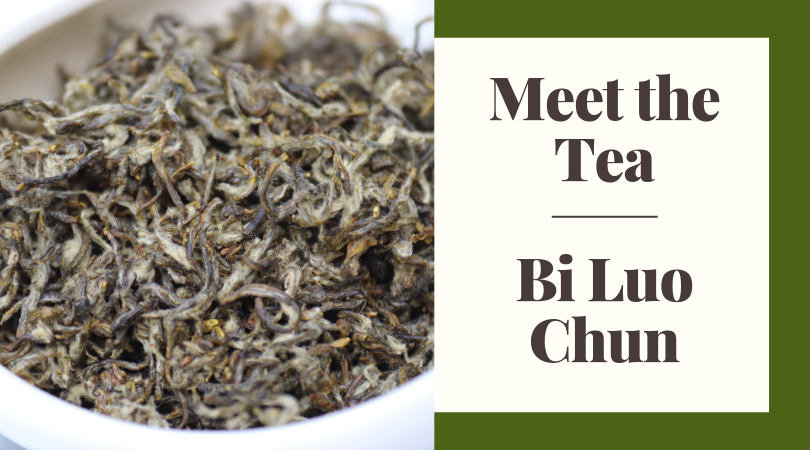 Bi Luo Chun, otherwise known as Green Snail Spring, is a green tea from the Dongting region of China’s Jiangsu Province. You might also see it called Pi Luo Chun. There are many lists of China’s 10 most famous teas but Bi Luo Chin is usually near the top of them, second only to Dragonwell.

There are two different mountains within the Dongting area. Dong Shan (East Mountain) is on the eastern shore of Lake Tai, the third largest freshwater lake in China. Xi Shan (West Mountain) sits on an island within the lake and is prized for the gentler taste of its teas.

The name Bi Luo Chun is sometimes applied to teas from other regions, like Yunnan, that are made in a similar style. These are all fun to explore but keep in mind that the original Dongting version is what inspired their creation. I definitely have a strong personal preference for the “real” thing.

There are quite a few legends associated with this tea. Bi Luo Chun’s original name was Xia Sha Ren Xiang or scary fragrance. The story goes that a tea picker ran out of room in her basket so she carried the leaves in between her breasts. The strong aroma coming from the leaves surprised her.

Supposedly the Kangxi Emperor visited the region and felt that such a wonderful tea deserved a more elegant name. It was he who renamed it green snail spring. From then on it was designated as a royal tribute tea.

Yet another legend that tells that this tea comes from a tree that was watered by the tears of a girl named Bi Luo. She was betrothed to a dragon and cried when he was slain. She then died and the tree sprouted leaves the following spring.

Bi Luo Chun should be made exclusively with tender buds and just barely opened leaves. The pickers need to be extremely selective in order to make sure that the leaves are not too big. Higher quality Bi Luo Chun is harvested as early as late March when the weather is still quite cool.

The leaves are pan-fried in woks in order to stop oxidation. The leaves are then pressed and rolled by hand into their signature curled shape. This step can take as long as 45 minutes of continuous motion. I am always amazed at how the tea masters put their hands directly onto a hot wok. It’s amazing to watch!

One thing you’ll immediately notice about Bi Luo Chun is the fine hairs that cover the leaves. In a good quality tea these trichomes will cover the inside of the container and anywhere else that the leaves touch. There are so many that they will give the brewed tea an almost cloudy appearance for the first few infusions. It also affects the mouthfeel, giving it an almost fuzzy quality.

Bi Luo Chun is known for its rich, vegetal flavor. The aroma can range from fruity to floral with a toastiness that reminds me of sweet rice. It not quite a genmaicha-like effect but I think you’ll get the idea. The finish is clean with a lingering sweetness.

Although you certainly could brew it in a gaiwan, the leaves are incredibly tiny so I actually prefer to make it in a more western fashion. Glass teapots are my go-to so that I can look at the beautiful leaves unfurling. If you’d rather not do that, brewing it in a fairness pitcher also works very well.

Since Bi Luo Chun is a green tea it is recommended to use cooler temperature water. You can adjust to your personal preference but 175-185° is a good starting point. A good rule of thumb is that the hotter your water is, the shorter the steep time should be. I generally prefer no more than 3 minutes.

The tiny buds make it difficult to measure accurately so it can help to weigh your leaves. Three to four grams of leaf per cup of water seems to work well. I also really enjoy drinking Bi Luo Chun “grandpa style”. The leaves sink right to the bottom of my glass, making it much less work to strain them while sipping.

A lot of tea drinkers find Bi Luo Chun to be bitter the first time that they make it. This is often because the leaves are very delicate. It is better to pour the leaves into a vessel full of water rather than the other way around. This method is called shangtou and it makes a big difference in the cup.

I was inspired to make a little video the other day while enjoying some Bi Luo Chun this way.

Have you ever tried Bi Luo Chun? What is your favorite way to brew it? I’d love to hear your thoughts in the comments below!