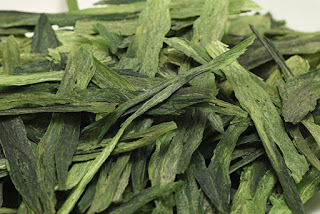 One of my favorite things about Chinese tea is the rich cultural history that can be traced back thousands of years. Many teas have legends associated with them that have been passed down through the centuries. These are a few of my favorites.

Bi Luo Chun’s original name XiaSha RenXiang translates to scary fragrance. Legend has it that tea pickers ran out of room in their baskets so they placed tea leaves between their breasts. Body heat caused a surprising aroma to be released from the leaves. I don’t really find this tea scary at all but it is definitely delicious. It was later renamed green snail spring by the Kangxi Emperor.

There are several legends that surround this famous tea. In a city by the same name, there is a well that was said to be inhabited by a dragon. The local people would pray to it for rain when there is a drought. I have heard from several people who have visited the well that after rain, the lighter rainwater floats on top of the dense well water creating a rippling effect. It is this curious phenomenon that is often attributed as the source of the legend.

Another story tells of Emperor Qian long visiting a temple and watching the ladies picking tea. He enjoyed it so much that he decided to give it a try.While he was picking the tea he received a message that his mother was ill. In his haste to leave he shoved the leaves into his sleeve. When the Emperor visited his mother, she noticed the smell of the leaves and he had it brewed for her. It is said that the distinctive flat shape of Long Jing is designed to mimic those leaves.

Taiping Houkui is an unusual green tea that is produced at the foot of Huang Shan in Taiping County. The name is most often translated as peaceful monkey leader. You might ask yourself, what does that have to do with tea? A local legend holds that the monkey king fell ill and died after losing his son. A farmer discovered his body and carefully buried it. Tea trees grew from this spot the next year and the farmer harvested the leaves, making them into the distinctive blade-like shape.

Do you have a favorite legend involving a Chinese green tea? Let me know about it in the comments!

This amended article originally appeared in the October 2015 issue of Tea for Me Please Quarterly. Sign up using the form below to receive informative tea articles four times a year.