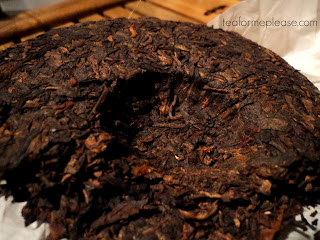 Most of the teas that I’ve tried from Jalam Teas have been sheng, or raw, puerh so it was a surprise to receive a cooked (otherwise known as shu) cake. A change of pace is something that I appreciate and this one was particularly enjoyable. The leaves were well compressed but I was still able to break pieces off with my hands. It was surprisingly mellow and sweet with a pleasant earthiness. I was reminded of garden soil after it rains rather than the usual forest floor affect that many cooked puerhs have. There was no bitterness, even when I left it steeping too long in a travel mug. The amount of infusions that I’ve gotten out of each serving have been innumerable. One of my favorite things about receiving these monthly shipments from Jalam Teas is having the opportunity to learn more about the people who produce puerh in Yunnan. This cake was harvested by people of the Dai minority.

“Like many of the hidden tea regions, elders play a huge role in both the production of tea, and in my documentation of tea’s uses and roles in people’s lives. Women play a great role in the production and selling of teas, and it is often the case that grandmothers will sit sorting out tea leaves on the ground floor, chatting as they do.”

The postcards that come with each tea provide a window into the origins of the cake. I now have a growing collection and have been trying to come up with a way that I will be able to display them.