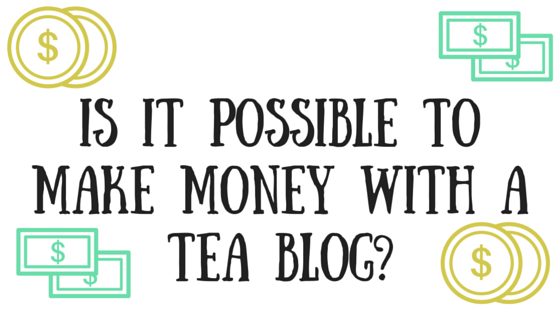 When I first started my blog way back in 2008, it was a very casual thing that I didn’t really have any plans or intention for. As tea became a bigger part of my life, so has the blog along with it. I still don’t really know what I’m doing or where I’m going but the blog has truly taken on a life of its own.

Lately I’ve had a lot of friends, especially those outside of the tea world, asking about whether or not it is possible to make a viable income with a tea blog. I’m sure they have visions of celebrity fashion, food and lifestyle bloggers in their heads. I’m not going to say that it’s impossible but it is extremely unlikely to be able to live full time from the revenue of a tea blog.

Google gets weird about sharing Adsense revenue. I will tell you that I began with ads on YouTube in June of 2013 and eventually added ads on the blog in July of 2014. It took nearly two years to earn enough in order to receive an actual payment. To date Amazon affiliate ads have been the most profitable. The only trouble is that I tend to use any of the payments I receive to just buy more tea stuff.

Occasional freelancing gigs pop up from time to time but they are sporadic and very spread out over the years. That has definitely been my biggest source of income, albeit indirectly derived from the blog. Since I now work at Teavana I’ve had to turn down several opportunities due to potential conflicts of interest.

All together it adds up to a bit of pocket change but certainly not anywhere near a supplementary income. In fact as most would argue (including my extremely understanding boyfriend), I am by and large losing money on the deal. There are upfront costs as well as ones I forget about such as impulsively buying new things to write about. I also have a tendency to purchase every book on tea that I can find for the same reason. Registering my domain name has cost me $10.00 per year since purchasing it in 2013. I also pay $36 annually to Podbean for podcast hosting.

I usually dedicate several hours of each day to research, writing and interacting on social media. This is in addition to working a full time day job and commuting two hours each way every day. I recently had to scale back the publishing schedule but for several years I was publishing once, sometimes twice a day. The blog is now published three times a week along with a monthly podcast and quarterly journal. It’s a labor of love but all of that is still a lot of work.

The next question that usually follows during this type of discussion is, but is it worth it? Absolutely! I have the privilege of tasting some of the most incredible teas. This blog has also connected me with amazing people from across the globe as well. I wouldn’t trade any of that for the world. Money has never been part of the equation for me. My advice to anyone who blogs (or is thinking about starting to) is to put your heart where your passion is. If you wouldn’t do it for free, you shouldn’t do it in the first place!

I’d love to hear your thoughts in the comments, especially from my fellow bloggers (tea and otherwise)!