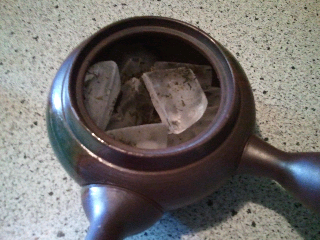 I’m sure most of you are experiencing the unbelievable heat that I’ve been having in New Jersey this week. I was craving a cup of tea but did not want to touch anything hot so I decided to try a cold brewing method that I had heard about, shinobi-cha. Using this method, a houjin is filled with ice cubes and gyokuro tea leaves. The tea is drank slowly as the ice melts. I wanted a bit more than my tiny houjin could hold so I decided to use my kyusu with sencha instead.

I’m incredibly impatient so I poured the tea in dribs and drabs as the ice melted rather drinking one larger cup. The first few pours were a little too strong and vegetal, even bordering on bitter. They reminded me very much of uncooked broccoli. Thankfully the tea mellowed out with each subsequent pour. The flavor was similar to that of hot brewed sencha but it was a bit stronger and more concentrated. I really enjoyed how brewing this way forced me to savor each sip, not something we often do with iced tea. I would definitely recommend giving it a try.

Why Tea Shouldn’t Be Made in K-Cups