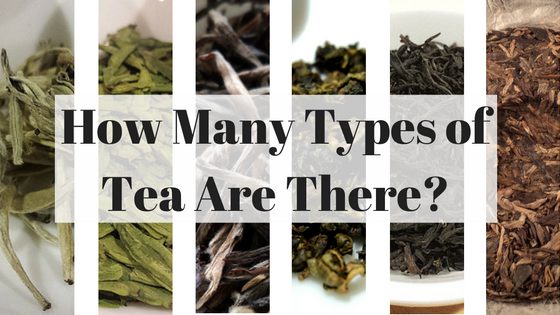 How many types of tea are there? The answer to that question really depends on who you ask. There are many gray areas in tea and there is much left open to interpretation. The western world is also just now discovery categories of tea that have existed in the tea lands for centuries. In this post, I will be listing the categories of tea as I see them.

Before we move on to the different types, did you know that all tea is made from the same plant? The differences just come from how the leaves are processed. Check out this post for more:

White tea is the least processed type of tea. Contrary to popular belief and many tea vendor’s websites, it is not rare! After picking, the leaves are laid out to dry in the sun. Hot air can also be used to achieve this. There is no “kill green” step and the leaves are not typically shaped in any way. Some withering occurs but it is not necessarily something producers try to achieve (like they might with black tea or oolong). Silver Needle is probably the most well-known white tea but there are other varieties that are made with more than just buds.

For more on white tea, you might want to read:

Green tea is often referred to as unoxidized but that’s not exactly the case. Tea leaves begin to wilt as soon as they are removed from the plant. Heat is applied to the leaves by the tea producer as quickly as possible. This brings oxidation to a halt so as to preserve them in their green state. Chinese teas are typically pan fired whereas Japanese green teas are usually steamed. Some manufacturing methods also use blanching the leaves in hot water.

Want to learn more about green tea? Check out:

The processing of yellow tea is very similar to green tea. What differs is that the leaves are repeatedly wrapped in paper or fabric in between several firing steps. This process can take several days and results in a smoother, less grassy taste. Yellow teas are rather rare on the western market (as evidenced by the fact that I’ve only ever written about two of them). There are some admittedly valid arguments that there is no true yellow tea anymore but for now, I do consider it different enough to need its own category.

Oolong tea is partially oxidized. It is the largest category of tea so the tastes can range from very green and floral and dark and roasted. Oolong is often described as being between green and black tea. While that is sort of true, it generalizes things a bit. Leaves destined to become oolong are withered, rolled and carefully oxidized. The producer needs to apply heat at precisely the right moment in order to prevent the leaves from oxidizing completely.

Black tea undergoes the same processing steps as oolong but the leaves are completely (or very nearly) oxidized. Both the finished leaves and the brewed tea will have a reddish brown coloration. This is caused by catechins being converted into thearubigins. The taste of black can vary quite a bit depending on the region and how the tea is made. Although it’s usually thought of as being served with milk and sugar, black tea is not always the punchy and astringent kind.

Here’s a bit about some of my favorite black teas:

The category of dark tea, also known as hei cha, refers to any tea that is fermented. It’s important to note that fermentation in tea is a different biological process than the one used to produce beer and wine. Puerh falls under this category as do similarly processed teas from regions of China other than Yunnan. Some argue that raw puerh should be categorized as a green tea but there are some key differences. Sheng is heated in a similar fashion but the leaves are dried in the sun rather than by hot air. They retain some of their natural enzymes and bacteria which will allow the tea to gradually oxidize as well as ferment over time.

Check out these past posts for more on puerh:

Please let me know in the comments if you prefer a different method of categorizing tea. I’d love to get some healthy discussion going on this!