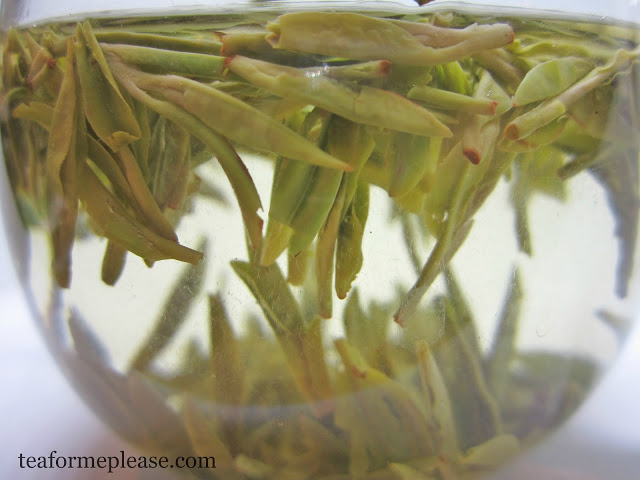 I love Dragonwell. A lot. That’s why I was super excited when Sarah of Nomadic Tea Party offered to send me some of the pre-Qingming dragonwell that she sourced for her company Firepot Nomadic Teas. She was able to secure just one pound of it! It is so limited that they are actually selling it at cost so that others can experience it for themselves.

I really wanted the little bit I had of this tea to last so I brewed up only 8oz at a time in my glass sharing pitcher. It’s the perfect size for that purpose and I love being able to watch the leaves in the water. Otherwise, my go-to vessel would be a glass gaiwan. Grandpa style is another favorite brewing method but not with a tea as precious as this one.

The leaves were tiny, flat, and almost completely intact. Even before brewing it was easy to see that the plucking standard was very strict. “Lotus Heart” means that only the terminal buds were selected. Occasional clumps of trichomes (the tiny hairs that cover tea buds) could be seen. They were also very visible while the tea was steeping. This tea is pre-Qingming which means that it was harvested before tomb sweeping day (April 5th for 2017). This is the first harvest of the year and is generally considered to be the most desirable.

Right off the bat, the taste of this tea was floral with the signature chestnut aroma that I would expect from dragonwell. Its texture was buttery smooth with a lingering sweetness that I was still tasting long after the last sip was swallowed. There was hardly any astringency at all, especially when following the recommended water temperature of 130 degrees.