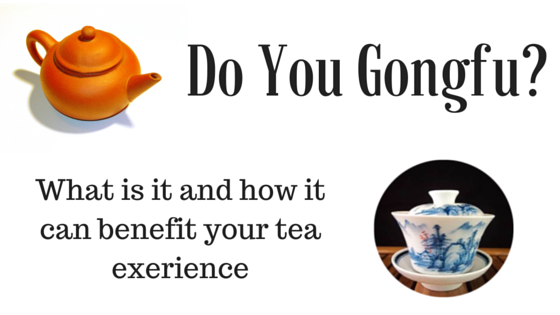 Gongfu (sometimes also called kung fu) simply means preparing tea with great skill. It’s often referred to as the Chinese tea ceremony but that’s not quite correct. Although the process can feel very ceremonial the truth is that there is no such thing as a Chinese tea ceremony. Gongfu is not codified in the rigid way that you might find in Japanese Chanoyu. China is a large and ethnically diverse country with many different ways of drinking tea (and most people are far less formal about it). This way of preparing tea is also extensively used in Taiwan and is becoming increasingly better known in the U.S.

In comparison to western brewing methods large leaf volumes, shorter brewing times and smaller brewing vessels are used to achieve multiple infusions. This method concentrates the aromas of the tea, elevating the sensory experience. Oolong, black tea and puerh tend to do very well when prepared in the gongfu style. Some people are quite adamant about white and green tea not being brewed this way. I say to each their own. All that matters is that you enjoy the end result!

So, what do you need to give gongfu a try? The basics mostly consist of a small brewing vessel such as a gaiwan or a teapot that is no bigger than 4 or 5oz. Teapots that are used for gongfu are commonly made out of yixing clay but they can also be made of celadon and other materials. Tea tables are made specifically for gongfu so they have a way to catch drips and spills. If you don’t have one, I’d recommend using some kind of tray until you get the hang of it.

The cups that are used in gongfu tea service are typically very small, holding just a few sips of tea. It’s a stark contrast to venti lattes and big coffee mugs but I find that they force you to really focus on the tea. While they aren’t totally necessary, it is nice to have a few around.

How to Do It

HAt their most basic, the steps are as follows:

1. Preheat the brewing vessel and cups with hot water.
2. Empty the water and add your tea leaves. This where tea tables come in handy!
3. Quickly do a hot water rinse (less than 15 seconds) of the leaves. This rinse is generally poured onto a tea pet. Some people opt to drink the rinse. That is totally up to you.
4. Pour hot water in again, this time brewing for 15 to 30 seconds.
5. Empty the brewed tea into a pitcher and distribute evenly between the teacups.
6. Enjoy your tea!
7. Repeat until the leaves loose their strength.

In the case of oolongs a lot of people like to use aroma cups. Originally used for serving sake, tall skinny cups are used along with smaller tasting cups. The brewed tea is first poured into the tall cup and then transferred to the smaller cup. Its narrow shape traps the aromas of the tea, enhancing that aspect of the tea while drinking.

How Much Tea to Use

Leaf volume is a bit tricky to pin down since every tea and vessel is different. Teaspoons won’t apply here since you aren’t brewing in a western fashion. A good rule of thumb is to just barely cover the base of your teapot or gaiwan. For accuracy sake, especially when doing reviews, I prefer to weigh my tea leaves on a small pocket scale. In a gaiwan I will generally use between 4 and 8g of tea. My yixing pots will generally use about 6 to 8g. My very tiny Petr Novak teapot can only fit 3g of leaf. Rolled oolongs will expand quite a lot so keep that in mind when choosing the volume of tea that you are using.

How do you gongfu? Let me know about it in the comments!

To find out more about the tools used in the gongfu method, check out these past articles: