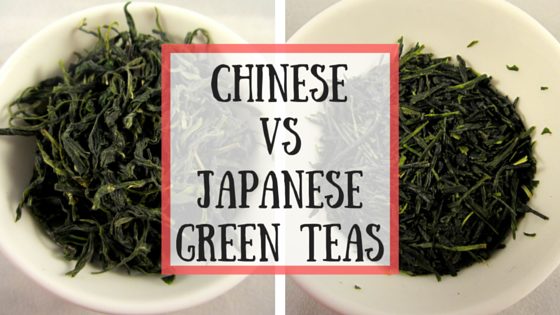 Part of the fun of discovering tea is getting to know the different types that each country produces. There are so many nuances and grey areas that the possibilities for nerding out are endless. I thought it might be helpful to put together a comparison of the green teas from two of the largest producers of this type of tea.

No one really knows for sure when people began preparing tea as a beverage but most experts agree that the Camellia Sinensis plant originated in China. Lu Yu’s The Classic of Tea, supposedly written during the Tang Dynasty, was the first documented book on the subject of tea. Tea was introduced to Japan in the 9th century by Buddhist monks who carried seeds with them from their travels to China. Eisai usually gets the credit for establishing tea in Japan because he wrote the first Japanese book on tea, Kissa Yōjōki.

The environment in which tea is grown has a large effect on the way that the finished product will taste. China and Japan are geographically close so they share a lot of similarities. Both countries are mountainous with widely ranging microclimates. Most of China’s tea-growing regions are located in southern provinces, away from the coast. Japan, on the other hand, is comprised of more than 6,000 islands. The proximity to the ocean is definitely a factor in the way that the brewed tea tastes

Both the Chinese and Japanese governments operate research stations where varieties of tea are studied, developed and cultivated. They might be selected for taste, pest resistance or because the leaves have a particular coloration. In China, the varieties are frequently named after the tea that is produced with them (Tie Guan Yin or Long Jing No. 43 for example). In contrast, Japanese tea production is dominated by the Yabukita cultivar. I highly recommend checking out the list of registered Japanese varieties on My Japanese Green Tea.

The biggest difference between Chinese and Japanese green teas is how they are processed. When manufacturing tea heat must be applied to the leaves in order to stop oxidation. This is referred to as fixing or the kill-green step. A large wok is typically used to do this in China, effectively stir-frying the leaves. Ovens are also used to achieve the same effect in some places. In Japan oxidation is stopped by steaming the leaves. The level of steaming, ranging from about 20 seconds to 160 seconds, is one of the factors that determine the category that tea is placed in.

The way that tea is harvested also has a big effect on the what the tea that ends up in our teacups looks like. China has a long-standing tradition of hand picking tea leaves whereas Japanese tea is most frequently harvested by machine. The result is mostly intact leaves in China and a more broken leaf in Japan. While there are exceptions to this rule, I don’t come across them often. Regardless of whatever cultural bias you might run into, one method is not any better than the other. They are simply different, each reflecting the region that produced them.

Chinese green teas typically have a nutty or more roasted character. The chestnut notes in Dragonwell are a great example. This is mostly caused by the pan frying during the kill-green step in processing. Japanese green teas have a much more vegetal, almost seaweed-like, quality. Kabuse (shade-grown) teas like gyokuro highlight this particularly well. The leaves are usually so tender after brewing that you can eat them quite easily.

Which type of green tea do you prefer? Let me know about it in the comments!