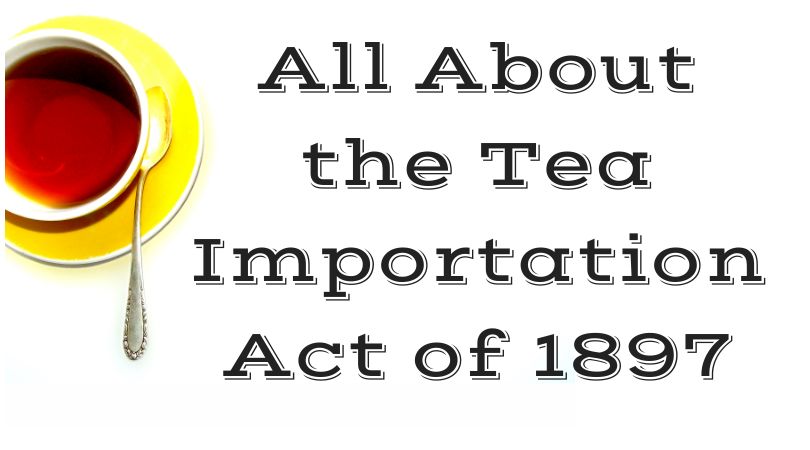 Did you know that for 99 years there was a government agency in the United States dedicated specifically to tea? The Tea Importation Act of 1897 established the Board of Tea Appeals, which fell under the jurisdiction of the Food and Drug Administration from 1897 until 1996. Their primary function was to ensure the quality and safety of all of the tea being imported into the country.

The Tea Importation Act also authorized the FDA to appoint a board of tea experts whose job was to taste all of the tea being imported to determine whether or not it was fit for consumption. I can’t decide if that is a dream job or some bizarre form of torture. I’m sure those tasters had to try some pretty terrible teas over the years.

Why a Government Agency was Needed

Throughout the 18th and 19th centuries, tea was an important part of society but drinking it also seems like it was dubious at best. Adulteration was very commonplace both here in the U.S. and England. Coloring agents, leaves of other local plants, and even sheep dung were all potential inclusions. Victorian servants were known to resell their employers spent tea leaves.

While the Board of Tea Tasters was ostensibly set up to protect consumers, it also meant that just a handful of people had total control over what types of tea Americans had access to. They barred the importation of puerh tea for many years because they believed it was “musty”. And that was before intentional wet storage became a thing! I believe this is part of why puerh is not as well known in the United States as other tea varieties.

The End of The Tea Importation Act

There were several attempts to repeal the Tea Importation Act, most notably during the Nixon and Carter administrations. Congress was not successful until 1996 during Bill Clinton’s first term in office. Senator Harry M. Reid was quoted as saying “These tea-tasting people are just like lizards. You grab them and jerk something off and they are right back.”. While he did not succeed initially in getting the Tea Importation Act repealed, congress did succeed in forcing the tea industry to pay for operations rather than the federal government.

I found several interesting quotes from Robert H. Dick, the last tea taster before the Tea Importation Act was repealed. A link to the full interview with him is listed with some additional reading links below.

“I was also able to down to Yunnan, practically down to the Laos border where the the Pu Ehr teas are produced. Now, the Pu Ehr teas are rather infamous in this country because the Chinese treat them so that they produce a mustiness. They have a musty favor. Now, to the tea expert in this country mustiness is something on which they all agree. They would throw it out. The Chinese, from that area, like it and that is where I have a lot of my troubles from their attempts to bring it in.”

“Most of the larger packers follow the Act faithfully and they follow the procedures that were set up. However, there are some who do not and some of them, especially the Chinese grocers and some of the Japanese and the Indian grocers do not seem to understand or at least they pretend they don’t understand and we have difficulty at times getting these samples. Also, we have difficulty in really checking as to whether the samples are what they are supposed to be. Most of the Chinese invoices will come in and they will just list “tea”, and it can be just about anything.

You really don’t know what they do have. I am sure that a lot of the teas are coming in and are not being recorded or else they are coming in under another name because there are these types which we would reject because of the fact that they are very musty in taste. But they are very highly prized and highly priced in the Chinese community. I don’t have very many rejections and yet I go down in Chinatown and I’ll see all of these teas displayed in the grocery windows. I am unable to follow through on that.”

“Then later on I was able to go to China and I managed to cover quite a bit of territory in that country right after it was reopened to general travel. Imanaged to visit Hangchow, then the West Lake. The West Lake is a famous vacation spot for the Chinese. On the shores of the West Lake is a tea garden, Lung Ching Tea Garden, which is supposed to be one of the finest green teas in the world, and which the Chinese in particular prize very highly. They are willing to pay several dollars a pound. Even years ago, they were paying $10.00-$20.00 per pound, when $5.00 was considered a high price for tea.”

If only Dragonwell was still $20 per pound! I recently paid almost $40 retail for just 25g. I recommend giving the full interview a read.

Although the Tea Importation Act has been repealed, the Food and Drug Administration still regulates tea to this day. Tea falls under the Federal Food, Drug, and Cosmetic Act. State and local health departments are responsible for most of the enforcement. When I worked in tea shops I was required to take food safety training to make sure that we followed FDA requirements. There are requirements for labeling nutrition information and ingredient lists. They also regulate what health claims can be made about tea. One notable example was a company that promoted its teas as preventatives for COVID-19.

I hope that you all enjoyed this bit of tea history. Did you know about the Tea Importation Act? I’d love to hear your thoughts in the comments.

A Brief History of Tea: The Rise and Fall of the Tea Importation Act

Tea Importation Act; Tea Standards – A Proposed Rule by the Food and Drug Administration on 02/07/1996

History of the U.S. Food and Drug Administration – Interview with Robert H. Dick

Tea, but No Sympathy, for the Tasters