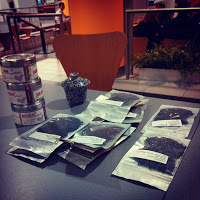 The Fancy Food Show, held annually at the Jacob Javits Center in NYC, is an event that has been on my wish list for some time. There were a number of tea vendors presenting so I was really excited to be able to go. I tend to get overwhelmed at large trade shows like this so I printed a list of the vendors listed and put them in booth order. I always forget something and this time it was my camera. Thank goodness for camera phones!

To say that the show was hectic and crazy is an understatement. The picture at the left is only the smallest of the three exhibit halls being used. My first few stops were a bit disappointing because although listed under tea, they weren’t really anything that a tea drinker like myself would interested in. Powdered tangering peel? No thanks!

Korean based Jukro Tea Company was definitely a standout for me. We don’t often get to experience Korean tea here in the U.S. and it was a real treat to sit down and have a cup of delicious black tea. They were also offered a delicious “tea snack” which was dried tea leaves that were seasoned. Next came old friends like Harney & Sons, Le Palais des Thés, Twinings and Stash Tea Company. Boston Tea Company and newcomers Octavia Tea were there as well.

Numi Organic Tea had a pretty large booth and they were really pushing their savory teas. I picked up lots of goodies and will be reviewing the rest of this very interesting line. The walk through the Chinese area was interesting but I think that the language barrier presented some challenges. Most of them had never heard of tea blogging and didn’t know what to make of the fact that I don’t sell tea.

Finally, I hit the tea jackpot! All within one area I visited Tealish Fine Teas, Tea Forte, Mighty Leaf Tea, Republic of Tea and Elmwood Inn Fine Teas. ITO EN‘s famous bench made out of tea leaves made an appearance and I got to taste their tasty new green tea latte. I got to meet author Bruce Richardson and it was great to get a chance to talk shop with people who really knew their stuff.

One of the big standouts of the show for me was Oliver Pluff & Company. They blend authentic colonial teas and my inner nerd was so excited to sniff a tin of Bohea. Kyle was very knowledgeable and I loved heard the anecdotes he shared about history and tea in the south. At his booth I bumped into the Tea Fairy, also known as Elyse from Tealet. She wasn’t hard to spot with her bright pink hair and eyelashes. At this point my feet were killing me but the show must go on. I finally moved on to the last exhibit hall and visited SeredipiTea, Teapigs and Pukka Herbs.

Oddly enough, my favorite part of the day was the impromptu tea session that I shared in the food court with Elyse from Tealet and the author behind The Snooty Tea Blog. After Elyse generously purchased some very overpriced hot water we shared many gaiwans. The teas we tasted were an Indian oolong and a really interesting green puerh. The water temperature wasn’t perfect but we made due with what we could in and in a way, I think that we enjoyed it more because of it’s randomness.

All in all it was a great show and I am very glad that I went. It was by far the most organized trade show that I have been to but I do wish that the tea vendor list had been better. I found out that I missed many favorites because they were not on my list. All of the vendor names in this post are links to reviews of their products that I have published. I thought that this might help you to learn more about them. I know that there are folks I forgot to mention but I want to say thank you to all of the people who took the time to chat and to all of the generous food vendors who provided snacks in between.